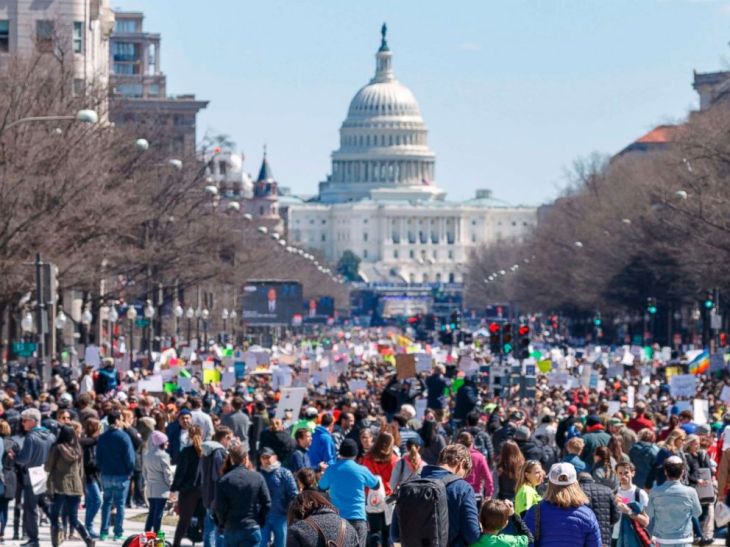 In the midst of the highly anticipated and highly rated Stormy Daniels Interview on “60 Minutes” and the “Who Bit Beyoncé?” controversies, there was the student-led ‘March For Our Lives’ protest Saturday in Washington, D.C., with sister marches across cities in America supporting their mission for gun control reform. I was in D.C. for the march and I’ve been to many rallies protesting all the unfathomable and inhumane policies pushed by this new administration in New York City. But, this march was different. The cause felt universal. There was solidarity in the air that permeated and touched every man, woman, and child present. 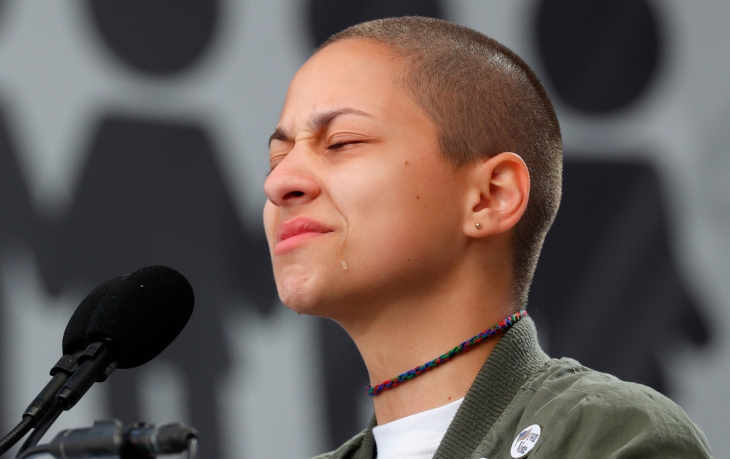 Emma González’s six minutes and twenty-seconds of silence included in her speech – to demonstrate the short amount of time it took the gunman to wipe out the lives of 17 victims – solidified the fact that this tragedy happened, and it could happen to ANY one of us, ANYTIME, ANYWHERE. And, if we don’t fight collectively for effective gun policies from our government, these mass-shooting epidemics will cease to exist. González, one of the student organizers and survivors of the Marjory Stoneman Douglas High shooting in Parkland, FL sparked a movement, along with her classmates, in just 5 weeks of the massacre on February 14, 2018. There were donations and support given to the teens by some of Hollywood’s A-listers, Oprah Winfrey and George Amal Clooney to name a few. Kimye (Kanye West and Kim Kardashian) and Steven Spielberg were in attendance. As much as I love these celebrities it was great to see that their association with the protest – or even their presence didn’t overshadow these students’ mission. Although the crowd was wowed by performances from Miley Cyrus, Ariana Grande, and Lin- Manuel Miranda – the true superstars were the inspirational Parkland students and fellow gun violence survivors/activists who took to the podium visiting from Los Angeles and Chicago. 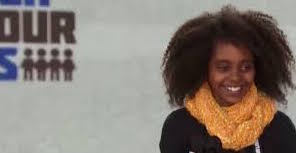 Two little girls (King, (from left-to-right) Adler) that stole the spotlight and gave the most impressive and touching speeches of the day are Yolanda Renee King, Martin Luther King’s granddaughter and Naomi Wadler. King led a chant that had the crowd enthralled and enamored with this spirited 9-year-old, descendant from the iconic civil rights leader. Not to be left behind, 11-year-old Naomi Wadler quickly commanded the crowds’ attention with her choice words: “I am here to acknowledge and represent the African American girls whose stories don’t make the front page of every national newspaper, whose stories don’t lead on the evening news,” Wadler said. “I represent the African American women who are victims of gun violence, who are simply statistics instead of vibrant, beautiful girls full of potential. For far too long, these names, these black girls and women, have just been numbers. I am here to say ‘Never Again’ for those girls, too.”

The national and international ‘March For Our Lives’ protests continues to have momentum and is receiving equal parts media coverage and backlash from the NRA and pro NRA supporters. Close one million people attended the ‘March For Our Lives’ in D.C. alone. Rick Santorum, former Republican senator recently stated students should forego protesting and learn CPR – to which Parkland teens responded: “CPR won’t save gunshot victims’ lives” as drew ridicule from healthcare professionals and other ‘March For Our Lives’ supporters condemning the former politician. One thing is clear: these young leaders have proven they can articulate their message with eloquence and class and will not be silenced or bullied by adults with power. They have tenacity and conviction to AFFECT real change in Washington to prevent further mass shootings.