Summer in New York City is replete with outdoor activities to fulfill the public’s yearning for quality music, film, fitness and cultural events. How do you choose from so many worthwhile attractions? If you were a theatre and cultural arts aficionado you’d be remiss not to take advantage of The Classical Theatre of Harlem’s free production of “Antigone.” This modern revival of Sophocles’ Greek tragedy is inspired by the Paul Roche adaption and infuses African-American traditions while adhering to the Greek tragedy format. Presented at the Richard Rodgers Amphitheater at Marcus Garvey Park and referred as the ‘Uptown’ Shakespeare in the Park by Ty Jones, Producing Artistic Director of The Classical Theatre of Harlem, lead actor in “Antigone”, and fellow theatre creatives – the space is conducive and complements “Antigone’s” production and set design with the names of those killed by police brutality.

Although the cornerstone of Greek plays emphasize tragedy, what stands out in this particular rendition and lauded by Carl Cofield, Director of “Antigone,” is the valor of conviction. The story of “Antigone” opens at the end of a battle between Antigone’s brothers, Eteocles and Polynices, both were vying for control of Thebes and died in combat. Ultimately, King Creon claims the throne as the new leader and proclaims one brother a hero (Eteocles) while the other a usurper. Antigone demands her slain brother (Polynices) receive a proper burial against the king’s wishes. The timeliness of “Antigone” couldn’t be more appropriate as we face an administration attempting to impose their unjust system on its citizens – and most of these citizens are challenging their ideology and taking to the streets to protests their policies – to salvage our Democracy. Alexandria King plays the main character of Antigone. Don’t be fooled by her small stature opposite King Creon, Ty Jones’s 6 ft. build. King’s powerful voice commands the stage and she does a superb job of portraying the defiant and valiant Antigone. Jones, known for his portrayal of Agent Donovan in the POWER series on the Starz Network is a natural as enforcer and upholder of law and order. But, Creon’s family and citizens of Thebes are reluctant in sharing his views. 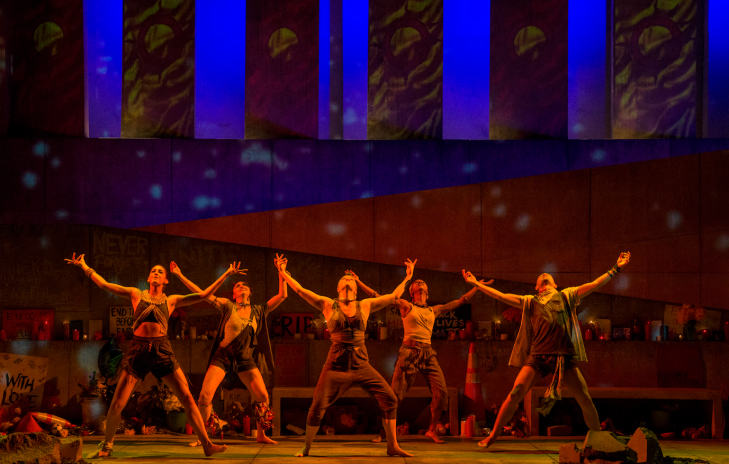 The choreography by Tiffany Rea-Fisher is stellar and the talented singers in the chorus are sensational. “Antigone” offers hope reflected in the selfless acts of sacrifice in the name of justice and even though the play, originally written by Sophocles in 442 B.C. – 2,500 years later, stands the test of time. Check out the free production of “Antigone” produced by The Classical Theater of Harlem at the Richard Richards Amphitheater at Marcus Garvey Park through July 29th, for more information, click here.