Just one more round of eyes! That’s the collective sentiment the producers of this year’s Oscars may have wished for before green-lighting all the programming events during the live telecast on Sunday night. First glitch: the”In Memoriam” segment that erroneously presented a photo of a very-much-alive producer: Jen Chapman; instead of her colleague, costume designer, Janet Patterson. According to an email exchange with Variety, Chapman said: “I was devastated by the use of my image in place of my great friend and long-time collaborator Janet Patterson. Patterson was a four-time Oscar nominee and per Chapman, “It is very disappointing the error was not picked up.” Chapman had urged Patterson’s agency to confirm the use of her image with the Academy.

Fake News? No, just a blatant disregard for quality fact-checking. How mortifying and indignant it must be to explain to people in your industry, heck! your family and friends – that you are indeed still alive!

Jimmy Kimmel’s jokes and sketches – aimed to shock and get laughs were not the true surprises of the show, although the unsuspecting tourists entering the Dolby Theatre – had just the right amount of hilarity and awkwardness, past hosts/comedians have strived for and experimented with. The unexpected higlight: Faye Dunaway and Warren Beatty mistakenly awarding LaLa Land the Best Picture Oscar instead of Moonlight and the mayhem that ensued was equal parts – priceless and embaressing. PricewaterhouseCooper (the global accounting firm administering the balloting for the Oscars for over 80 years) immediately took the blame hours later, but not before all the media outlets reported LaLa Land as the Best Picture for 2017 – and then retracted their stories. But the few minutes of confusion solidified the importance of fact-checking and how even the most prestigious of organizations can slip with this crucial journalistic tool. 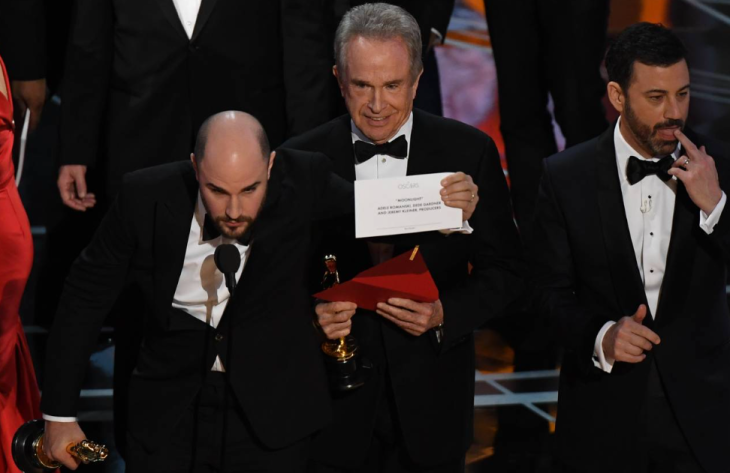