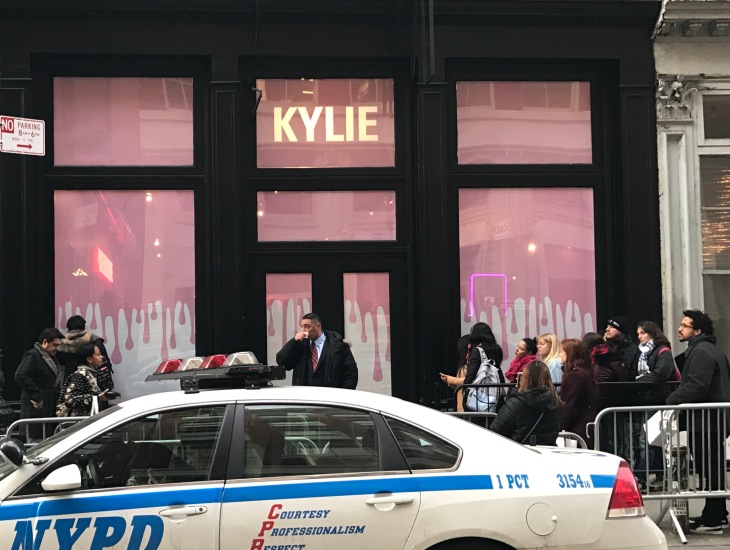 It’s the fifth day of Kylie Jenner’s New York’s pop-up store being open and there are no signs of her customer/fan base waning down- to get their hands on the coveted beauty products. I was there to check out the scene at the pop-up’s Soho location on Mercer Street. I arrived around 11am to find a line-up of about 80 enthusiastic customers braving the cold temperatures, patiently waiting, while barricaded along the street until they were let inside.

While on line, I decided to get into the minds of these beauty die-hards and ask them a series of questions: Do you love Kylie Jenner and would buy anything she promoted? Or do you love the quality of her cosmetics? What brings you here, really? As I surveyed the crowd to look for my participants, I had a preconceived notion that I would encounter pre-pubescent and teenaged girls. Boy, was I was wrong! There were fans ready to plunk down their cash – in their teens, early and late twenties, and early forties. I couldn’t believe Kylie Jenner’s demographic had such mass appeal and such a big age range. As I questioned more people, I found that they knew their beauty brands. Tarte, Anastasia, Too Faced are some of their favorites, but the majority of respondents said they preferred the quality of Kylie Jenner’s products. “I really like how long-lasting the lip kits are,” said one girl in her twenties. Others said they love the packaging and have been following Kylie on Instagram before her makeup line launched. 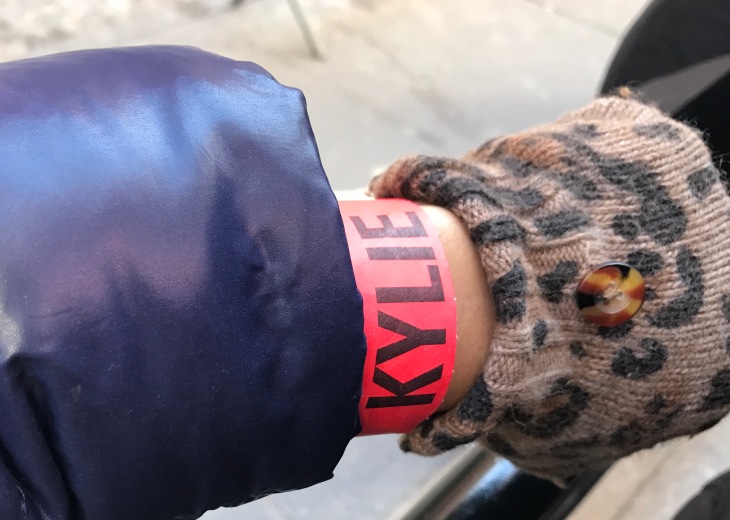 After about an hour, I was let in. Yes! I was given a wristband and asked to enter my name and email by staffers for a quick checkout. Very efficient! I thought. Unlike New York City fashion sample sales I’ve attend in the past, this crew had it together, and want customers in and out.

Once inside, you realize the store isn’t very big. There was a “pseudo-recreation” of a bed by the back wall with a brown furry throw on it and large screens with seductive video images of Kylie staring at you. Fans of current and previous collections will be delighted to see most sold-out products available for purchase: The Birthday, Holiday and Valentine’s collections are hanging on different walls. Sprinkled throughout the store, you’ll find Arthur George socks with Kylie’s logo, phone cases, patches, hoodies and other clothing from the https://kyliejennershop.com.

Jenner, who introduced her glosses in 2015, officially launched her global cosmetics line in 2016 and hasn’t stopped churning out, instant sell-out products – readily sought by fans – ever since. While Kylie Jenner has faced some obstacles along the way; comparisons of ColourPop Cosmetics’ significantly cheaper line; both makeup lines are produced by the Seed Beauty Factory; she’s determined to distinguish her line from others. Well-known bloggers/vloggers slammed Jenner on this detail, yet fans still show their unwavering support with their credit card purchases. The New York pop-up will be open until supplies run out.

In short, Kylie Jenner’s influence on the beauty industry has been solidified. Over 10 million in sales to date with her cosmetics line has the heavy-hitters in makeup paying attention and eager to mirror her success. Jenner’s success is a combination of cult followers and Jenner’s role as brand ambassador keeping her ahead of the beauty game.